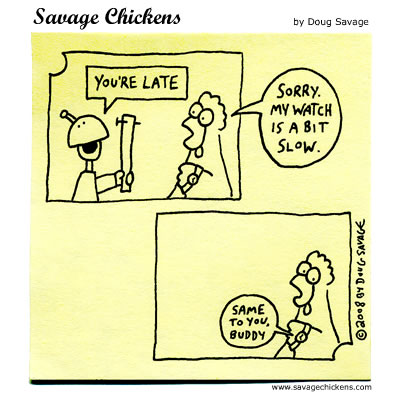 My oldest sister, Kay, is well known for her tardiness, but this last time literally took the wedding cake.

We were all invited to a very close and life-long family friend’s wedding. The bride, Linda and her groom, Mark, were both good friends of our family who happened to fall in love and tie the knot. The wedding was a very small and simple but gorgeous outdoor affair with the bride in ivory and the maid of honor in black. The reception followed immediately after, at the same location with a very nice catered buffet. My husband’s family as well as mine were all in attendance, and while we were all congratulating the bride and groom, Linda asked me if Kay were all right as she had noticed her absence, and Kay had RSVP’ed in the positive for herself and Kay’s husband and adult son. We were hoping that Linda hadn’t noticed Kay’s absence, and said we did not know where Kay and her family could be (this was in the days before cell phones were popular). We continued to enjoy the reception, dancing and food.

As the reception was winding down, and the caterers were packing away the food, Kay arrived alone dressed in jeans, and rushed over to congratulate Linda and Mark, and apologize for being late but offered no explanation. She also said that she was sorry her husband and son were unable to attend. I was thinking that the wedding was not a good place to RSVP in the negative. Kay came over to greet the rest of us, then took me aside to ask where the food might be. Shocked, I said that I was pretty sure it was either packed away or taken away by the caterers. Kay then ran off to find the caterers, managed to find the lead caterer and asked that the food be unpacked so she could make herself a plate. And if that weren’t bad enough, she then asked for additional plates for her husband and son, as they were unable to come to the wedding. The caterer did help Kay with the plates of food, then afterward, Kay walked over to talk with Linda, all while eating the purloined food and making more excuses for her husband and son, remarkably making this reception about herself. I was not too aghast to rescue Linda from Kay’s bad manners and grabbed my sister for a “sister” dance.

All I can say is, I don’t understand how we can be from the same family. I love my sister dearly, but she is clueless when it comes to etiquette. Linda and Mark, on the other hand, never mentioned my sister’s bad manners. They are truly a classy pair. My sister told me later on that she had lost track of the time.   0515-11

A few years ago I was interviewed by Bob Morris of the New York Times for an article he was writing on tardiness.    As is usual with a media interview, the reporter and I talk a LOT more than what is actually used in the article.    Mr. Morris had his own issues with being chronically late to various appointments and meetings.  He asked and I told him straight up, “Your tardiness is selfish because it inconveniences others and non-verbally communicate to others that your time is infinitely far more important than theirs.”  He was a good sport about it, said he hadn’t really thought of it that way and resolved to try harder.

People who are habitually late are intrinsically merely selfish.  Their time and their sloppy management of it is more important than the promise to arrive at a specifically scheduled time.   For the person left waiting, time can stand still as they are held captive to the tardy person’s agenda and schedule.  Tardy people force others waiting on them to struggle with their feelings of being offended, increase their stress as they try to figure out how to get done what needs to be done in the decreased time, how they are going to shift their schedules in light of this delay, etc.

Being a polite Etiquette Hellion does not mean we become unwitting victims of someone else’s habitual tardiness nor do we facilitate their continued tardiness as if there were no consequences to actions.   I plan on serving my dinner party meals about 30 minutes after the scheduled arrival time and I don’t wait for late guests (unless they call me to report a delay due to some unforeseen obstacle like traffic).   If someone has arranged to visit my house at 10 am, and they don’t show up until 11 am, I keep to my schedule and inform them that I either now have no time for their visit which must now be rescheduled or we have a very limited time frame due to my other scheduled obligations.  Your tardiness does not constitute an emergency on my part to shift my schedule and therefore inconvenience my guests, family or other people I have arranged to interact with that day.

Employees who are habitually late to meetings and with due assignments should not be accommodated but rather written up as being a hindrance to the productivity of the office.