I read an interesting article last week in the Los Angeles Times about how to avoid making the mistake of saying the wrong thing to someone in the midst of a medical, legal, financial, etc. crisis.    Read on….

Draw a circle. This is the center ring. In it, put the name of the person at the center of the current trauma. For Katie’s aneurysm, that’s Katie. Now draw a larger circle around the first one. In that ring put the name of the person next closest to the trauma. In the case of Katie’s aneurysm, that was Katie’s husband, Pat. Repeat the process as many times as you need to. In each larger ring put the next closest people. Parents and children before more distant relatives. Intimate friends in smaller rings, less intimate friends in larger ones. When you are done you have a Kvetching Order. One of Susan’s patients found it useful to tape it to her refrigerator.

Here are the rules. The person in the center ring can say anything she wants to anyone, anywhere. She can kvetch and complain and whine and moan and curse the heavens and say, “Life is unfair” and “Why me?” That’s the one payoff for being in the center ring.

Everyone else can say those things too, but only to people in larger rings.  (read rest of article HERE) 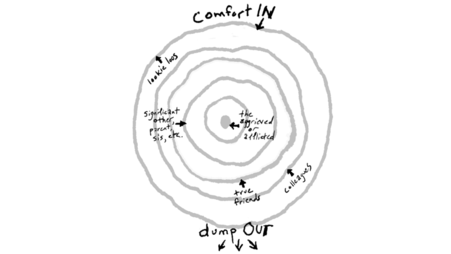 It can be summed quite simply and eloquently as “Comfort in. Dump out.”