After sitting with this situation for a few months, I thought you and the E-Hellions might be able to use this story as an example of how to make a Thank You note feel as cheap as possible…

I was recently invited to the baby shower of a relative, Amy. Seeing as I was unable to attend, I declined the invitation and asked the hostess (mommy-to-be, Amy’s mother, Anna Marie) where I could mail a gift. Anna Marie never responded with an address so I pulled Amy’s address from my book. I purchased some gifts from the registry, added in a few personal selections, wrapped them in cute themed gift wrap, and planned to mail them to the expectant parents. I decided to wait until the day before the event to send them so I wouldn’t ruin the surprise of the shower.

On the evening of the shower, I received a call from another relative who was able to attend the event. She was appalled that when she presented her gift, Amy’s sister-in-law checked her name off on a clipboard and handed her a pre-printed postcard that stated: “Thank you for the shower gift, we know that we will use it. We appreciate your thoughtfulness and the time you took to choose it!” The card was signed with the names of the expecting parents, but appears to be signed in Anna Marie’s handwriting! My upset confidant said that Amy refused to open the shower gifts in front of the group at the shower, counter to family tradition. I wondered aloud if maybe a more personalized thank you note would follow the private gift-opening.

Four months go by and the baby has arrived, healthy and adorable. I receive a post card with a lovely picture of the newborn on one side… and the pre-printed poem on the other: “Thank you for the shower gift, we know that we will use it. We appreciate your thoughtfulness and the time you took to choose it!” Again the note is signed with the parents’ names, but appears to be in Anna Maria’s handwriting and was mailed using Anna Maria’s return address. I hear from my relative who originally mentioned the cards that she received the same thing- a duplicate of the impersonal Thank You postcard. At least the poem writer knew we would choose useful, thoughtful gifts!

I have included an edited screenshot of the poem. The now blurred area contained the names of Poem Baby’s parents. 0812-14 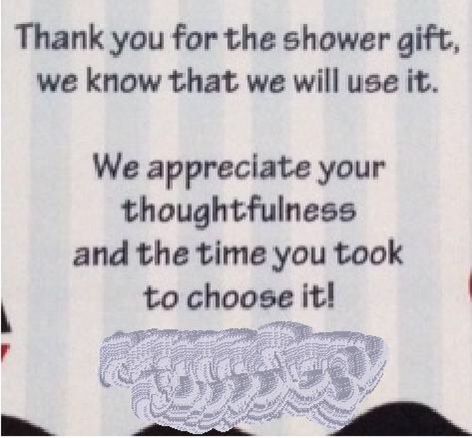