This is the story of my sister-in-law’s (SIL1) baby shower which happened this past weekend. I live halfway across the country and wasn’t able to attend. My other sister-in-law (SIL2) who was attending and I went in together to purchase a rather expensive gift—a stroller/carseat combo.

Well, along comes the day of the shower, and it turns out that a week prior, SIL1’s mother and father went out and bought EVERYTHING on the registry that hadn’t been purchased yet. Every single item. A week BEFORE the shower. Now, we’ve always known that SIL1 and her mother had a disturbingly close relationship (SIL1 and brother bought a house in the same neighborhood as her parents, SIL1 calls her mom 5 times a day, etc.) but apparently “grandma” started to get nervous as the date of the shower approached and there were still things not purchased and decided to remedy the situation lest her daughter feel any sort of slight. Well SIL2 was coming from out of town so didn’t pick up the stroller/carseat until a few days before the shower. Neighbor1 was running behind and didn’t make it to the store until a day before the shower—only to find that there was nothing left on the registry to purchase. Now the etiquette of registries is a tricky one, but who ever heard of the future grandparents going out a week before the first baby shower and cleaning it up? I could understand going out after the shower and getting what hadn’t been gotten, but before?

So, SIL2 and my mom head off to the shower, not knowing about what the other side had done, bringing our fairly expensive present. My mom told my brother to open the stroller/carseat first, but he said, no, we can’t because we already have one. Fully assembled at home. Got it a week ago. Mom and SIL2 were gobsmacked and didn’t know what to do. Frankly, it was a good thing I wasn’t there because I would have de-gifted and told them I’d return it to the store and get them something they didn’t have—which would have been nothing. I know I am going to think long and hard about getting them any presents in the future—and I am especially glad I didn’t purchase expensive plane tickets just to go and see them open a present they already had and certainly didn’t need or appreciate. It made the whole thing seem sordid and tacky and like a money grab. 0626-11

Why would you punish your brother and his wife for something your sister-in-law’s mother did?  It’s not like they can graciously decline to accept the offered gifts.   It sounds like your brother’s mother-in-law put him in an awkward situation with his family and friends.

Addendum….I almost never buy from registries for this reason (among others).  Instead, buy a creative gift you know is very unlikely anyone will also give.  My daughter is expecting my first granddaughter in a few weeks and her friends are hosting a baby shower soon.  This is one of the items I’m giving as a gift. 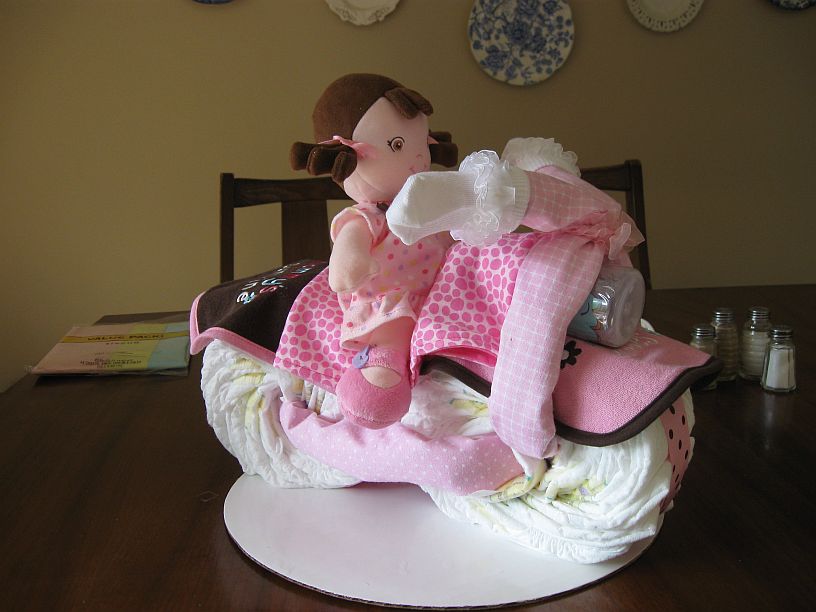 It’s a twist from the typical diaper “cake”.  Super easy to make (took me at most 45 minutes to assemble) and unique enough that no one will give the same thing.   The diaper bike consists of the following:

Newborn disposable diapers as the tires
2 rolled receiving blankets as the chassis/axles and handle bars
2 bibs as the fenders
1 burp cloth as the seat
1 4-oz. plastic bottle for the headlight
1 pair of frilly socks for the handlebar grips
1 pink bowed headband for the part above the light
1 doll, although this one in the photo is not to scale..didn’t want granddaughter with a huge doll

All sitting on a 14 inch cake round.  The most difficult part was figuring out how to assemble the diapers into a round spiral for the tires.  Problem solved by using an 8 or 9 inch springform pan.  I made a single tube using one diaper with a rubber band for the axle, stood it in the middle of the pan and added all the rest of the diapers in a tight spiral around it. Wrap a large rubber band to secure them all in place and cover with a 2 inch wide ribbon to hide the rubber band.

I cannot take credit for designing this.  I found photos on the web and figured it out myself.   Other gifts include a handmade, heirloom quality, crocheted baby afghan.