When I was a child I attended an elementary school in my neighborhood.   It was a typical Baby Boomer generation community where nearly every house had at least one child but usually an entire family of kids in a range of ages.   We grew up from age 5 or 6 knowing each other and playing group games in a playing field that spanned 6 to 10 backyards.

Junior High was the game changer as the children of a half dozen elementary schools were gathered into one larger facility for the continuation of their education. This was the age at which bullying by kids outside of your local group, strangers, reached its zenith.    My own experience of being bullied did not occur until the first day of 8th grade.  My sin?  From stress I had cried quietly in 4th period and by 7th period it was all over the school.   I walked into my 7th period class to hear someone yell,  “Hey everybody, Jeanne cried in 4th period!”   I was now marked as an easy target for kids desperate to not be known as easy targets themselves.  The worst bullying came from a group of girls from a different elementary school who did not know me, had not grown up with me.  My “neighborhood sphere” saw nothing in me worth bullying.  A group of 5 total strangers did.

In this social media saturated age and the Internet ubiquitously woven into daily life, we are exposed to a much wider number of total strangers, some of whom are malicious bullies.   A common means by which total strangers try to gain power and control over individuals is to harass, intimidate and embarrass people into silence by accusing them of racism or cultural appropriation.  The news seems to routinely report on a celebrity who crossed someone’s line, the groupthink goes viral and that celebrity feels compelled to apologize to appease complete strangers.

Your family,  circle of friends, acquaintances, co-workers, neighbors … these are the people in your “neighborhood sphere” that give you immediate feedback.   Assuming you are not isolated in an echo chamber, your “neighborhood sphere” of people who actually know you are the only sounding board one needs to ascertain if your actions and behaviors are truly offensive to THEM, the real people you interact with.   So why are  we giving power and control to absolute strangers on social media to define people as being racist in order to intimidate and harass people?   Let’s examine three recent cases that made the news of people who refused to bow to the tyranny of the perpetually offended.

“Kezia Daum, a teenager in Utah, tweeted photos of herself in her prom dress, with the comment “PROM”, a seemingly normal thing for a high-school student to do.  Not in these times.  Daum had unwittingly committed the crime of “cultural appropriation” by wearing traditional Chinese-style dress without being of Chinese descent, so she was subjected to an outpouring of fury and denunciation.  “My culture is NOT your goddam prom dress”, one young man tweeted in response, a sentiment that received more than 150,000 “likes”. Daum, to her credit, refused to apologize or remove her post, saying that she had meant no disrespect to Chinese culture and had worn the dress because she thought it was beautiful. If only more adults showed as much backbone in the face of unreasoning malice.”  National Review May 28, 2018 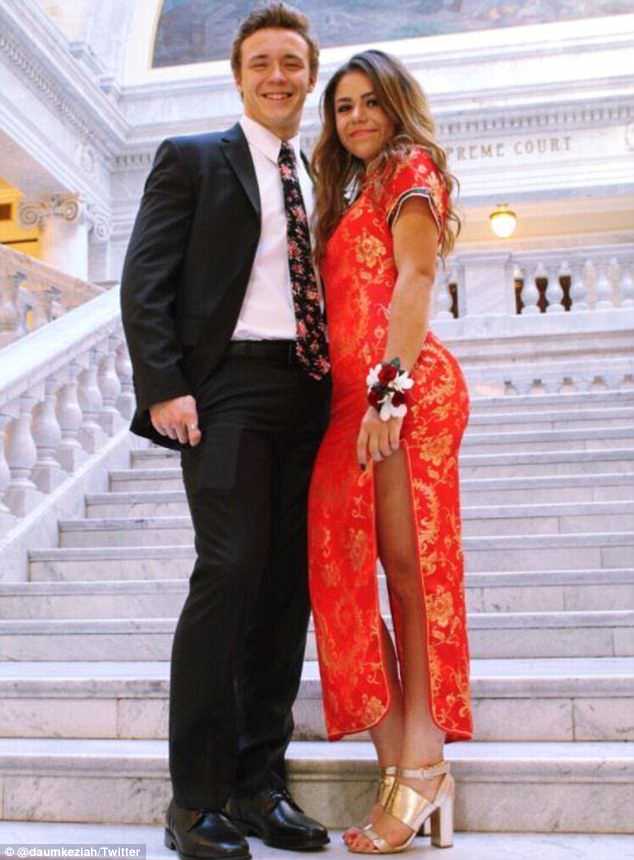 The “one young man” was Jeremy Lam whose tweet was “liked” by 150,000 people thus building into a group feeding frenzy to intimidate and humiliate Ms. Daum into groveling in apology.   It’s all about the power to control people you don’t agree with.

“At first, I felt bullied, but my mom helped toughen me up, and I began to realize how many people there were who were supporting me in my decision and encouraging me,” Daum says. “I learned that there’s always people who are going to hate and I can’t control that.”

And what did people living in China and Asia think about the issue once it went viral internationally?

In an outstanding article in the New York Times  (well worth reading in its entirety),  Chinese views were considerably different:

When the furor reached Asia, though, many seemed to be scratching their heads. Far from being critical of Ms. Daum, who is not Chinese, many people in mainland China, Hong Kong and Taiwan proclaimed her choice of the traditional high-necked dress as a victory for Chinese culture.

“I am very proud to have our culture recognized by people in other countries,” said someone called Snail Trail, commenting on a post of the Utah episode by a popular account on WeChat, the messaging and social media platform, that had been read more than 100,000 times.

“It’s ridiculous to criticize this as cultural appropriation,” Zhou Yijun, a Hong Kong-based cultural commentator, said in a telephone interview. “From the perspective of a Chinese person, if a foreign woman wears a qipao and thinks she looks pretty, then why shouldn’t she wear it?”

Recall how Miss Manners warns about who you choose to bully since they could be more powerful than you?  Associated Press award-winning columnist Neal Larson  applied the literary equivalent of a hard spanking to Jeremy Lam by exposing his hypocrisy:

Some guy on Twitter, Jeremy Lam, is of Asian descent and was triggered when he saw Kezia’s dress, promptly telling her that “My culture is not your G-D prom dress.” His profile picture shows him wearing a T-shirt and an Adidas baseball cap. So let me restate it this way. An Asian man, with the Hebrew-originated name Jeremy, wearing an American baseball cap manufactured by a German sportswear company, bullies a teenage girl for crossing a cultural boundary.

While I didn’t previously know that some dude in the United States with a Twitter account was the guardian of Asian culture, it was rather unfortunate that in earlier tweets he dropped the N-word in a “thug life” kinda way. That seemed to diminish his status as the cultural appropriation appropriator.

And for heaven’s sake, let’s just stop prosecuting people who praise a culture by partaking in it.

Case 2: Jeremy Lin and his dreadlocks

NBA player Jeremy Lin likes his hair and has explained that his sometimes extravagant hairstyles were a source of fun for him and a challenge to not care what people think. The NBA even created a web page of his “many hairstyles”. This worked for him until he sported a head of dreadlocks.

Former NBA forward Kenyon Martin criticized Lin for growing dreadlocks. In an Instagram video that now appears to have been deleted, Martin, a former member of the New Jersey Nets, addressed Lin’s dreadlocks, saying, “Do I need to remind this damn boy that his last name Lin?”

Martin continued, saying: “Come on, man, somebody need to tell him, like, ‘All right, bro, we get it. You wanna be black.’ Like, we get it. But the last name is Lin.”

What ensued has been described as “Linsanity” as social media weighed in.
But here’s the point…Jeremy Lin sought input from friends, fellow players , his “neighborhood sphere” regarding the appropriateness of having dreadlocks. One of those was fellow player Rondae Hollis-Jefferson who spent 8 hours getting his hair dreadlocked along with Lin. Another person was a Nets staffer:


I still wasn’t sure. A recent conversation I had with Savannah Hart, a Nets staff member who’s African-American, really resonated with me. I told her about my thought process — how I was really unsure about getting dreads because I was worried I’d be appropriating black culture. She said that if it wasn’t my intention to be dismissive of another culture, then maybe it could be an opportunity to learn about that culture.

“This process started out about hair, but it’s turned into something more for me … It’s easy to take things that we enjoy from other cultures — that’s one of the coolest things about a melting-pot society like ours.

Jeremy Lin was respectful to ask friends and co-workers their opinion on his hairstyle choice and in his “neighborhood sphere” there is no bullying or offense taken. Strangers who have no real life connection tried to bully him from doing something his closest associates had no issue with.

From Wikipedia: Avril Lavigne has been cited as appropriating Japanese culture in her song “Hello Kitty“. The song and music video depict Asian women dressed up in matching outfits and Lavigne eating Asian food while dressed in a pink tutu.[140] Its depiction of Japanese culture was met with widespread criticism, which has included suggestions of racism. Lavigne responded by stating “I love Japanese culture and I spend half of my time in Japan. I flew to Tokyo to shoot this video … specifically for my Japanese fans, with my Japanese label, Japanese choreographers and a Japanese director in Japan.”[141] A lot of the feedback Lavigne received on Twitter was favorable, and those who blamed her for racism were non-Japanese.[142]

This is a rather amusing case of online bullying because while Lavigne’s “neighborhood sphere” had no issues whatsoever with the music video, “non-Japanese” bullies applied their westernized neocolonialism with the belief that the Japanese are not sufficiently “woke” enough to recognize that they should be offended so white people need to be offended for them.

Dress and hair are not the only things deemed to be culturally appropriated or racist:

The list of things people can choose to be offended by grows bigger and more ridiculous by the day. It’s a bully’s dream come true….how many ways can I gain power over you, let me count the ways.

Next post: Online Bullying, Part 3: Online Bullies Are Silencing Scientists And We All Lose