You’ve spent months planning a wedding that reflects your tastes and who you are as a couple.  Your family and friends have invested considerable time to make the wedding day as beautiful as possible.  And as you are leaving the reception to begin your newlywedded adventure, your final image of your wedding day celebrations is this…. 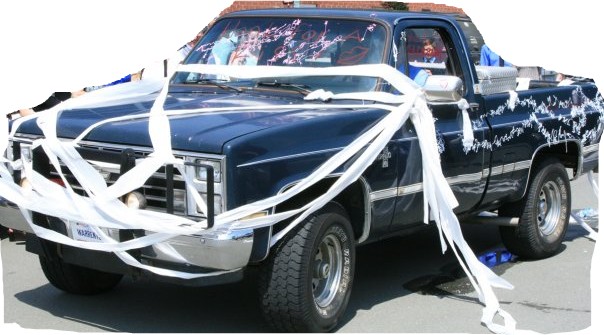 Not quite what you expected, was it?  According to a recent poll of Ehellions, 93% of them did not include toilet paper in their vision of how their wedding would be.   Fortunately the bride and groom who made their getaway in the truck above had a good sense of humor but of the only two other incidents I’ve seen of toilet paper used to decorate the nuptial chariot, neither couple thought it was funny at all.

So, to save all you clueless young bucks from eternal damnation in Etiquette Hell for an abysmal decor job, I’m here to spread the gospel of good taste in how to decorate a vehicle.

Just Don’t  #1 :  If the best man, all the groom’s male family members and the bride’s male family members are refraining from having anything to do with decorating the getaway vehicle, this should be a huge red flag to stop and think whether this is something the couple would want done to their getaway car.   If they have gone to great lengths to swap vehicles or hide their own vehicle, that is a good indication they would not appreciate the car being decorated.

Just Don’t #2:  Personal hygiene products meant to be used on private body parts have no business being used outside of their designated function.  Toilet paper belongs on one’s backside and then into the toilet and then into the septic system.  Period. Same goes for the nasty, trashy phenomena of using condoms.  I can’t believe I even have to say anything about using condoms but some guys appear to be utterly obtuse and clueless.  I, for one, will remove condoms on a vehicle before the bride or her family, which does include elderly aunts and grandparents, see that embarrassment and if you were the cretin who put them there, I don’t care if your little love cup gets chipped by my destruction of your “artwork”.

Just Don’t # 3:  Where I come from, using toilet paper to “decorate” a car is an act of passive-aggressive contempt.  I should know, at age 18  I and several co-workers TPed our manager’s yellow Stingray Corvette with rolls of toilet paper on his last night working at the local McDonald’s and we didn’t do it because we respected him.   Some story contributors to Ehell have admitted to using it as a passive-aggressive form of retaliation against a bride they considered to be a bridezilla.  So, yeah, if I see TP on a wedding day getaway car, I’m going to wonder what issues the decorators have with the couple, the bride or the groom.

Just Don’t #4:  Shaving cream or shoe polish. Just don’t.  It doesn’t remove the paint but it lightens it by several shades so that whatever is written in shaving cream becomes a ghost image.    When I was 17, I used shoe polish on my then boyfriend’s car prior to our participating in a homecoming parade.  Until he sold that car, the words, “BOWIE SR. HIGH CLASS OF 1977”  were etched in one foot high letters on his hood.  Poor guy, he went to a rival high school, too.  A friend of mine said that someone used shaving cream on the side of their getaway car and even though they raced to the car wash, it was too late and the words, “JUST MARRIED”, were etched into the paint.    Googling “shaving cream car paint” yields numerous stories of people forking out large sums of money to repair damaged car paint after a wedding or prank.

Use liquid chalk or window markers, which can be purchased at any craft supply store.   I’ve also seen them at auto supply stores for around a buck apiece.   Just be careful to not obstruct the car window to make driving unsafe. 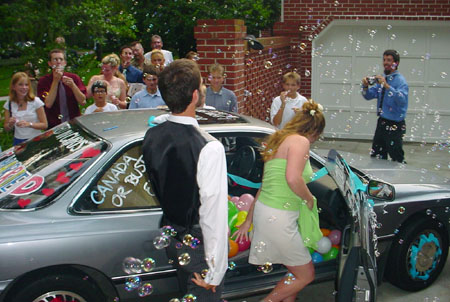 Just Don’t #5:  No Silly String.  It can cause hundreds of dollars of damage to exterior paint and vinyl.  It is next to impossible to remove once it has dried and the dyes within the string will permanently stain paint clear coats and vinyl car tops and interiors.  In many places, the sales of Silly String and similar products has been banned from within 1,500 feet of parade routes because of the damage done in the past to automobiles and fire trucks.  That pick-up truck in the photo above has Silly String sprayed on the back fender and seven months later, it’s still there.

Just Don’t # 6:  No confetti, glitter or cornstarch/flour in the vehicle.   The problem with these items is that once embedded in the carpet, the owner will never get it out.  Cornstarch or flour in the AC vents may yield a surprise when first used but it’s a gift that keeps on giving, sometimes for years, every time the heat or AC is turned on.

Do # 1:   Think ahead and plan on doing something that blesses the happy couple.   One Ehellion told how her future brother-in-law had a magnetic sign made saying “Just Married” that he placed on the car.  Another told of their groomsmen taking the car the morning of the wedding and giving it a thorough cleaning inside and out and waxing.

Do # 2:  Purchase ribbon (wire-edged is best) or tulle netting to decorate the car without destroying it.  See how tidy and attractive it is in the photo below? 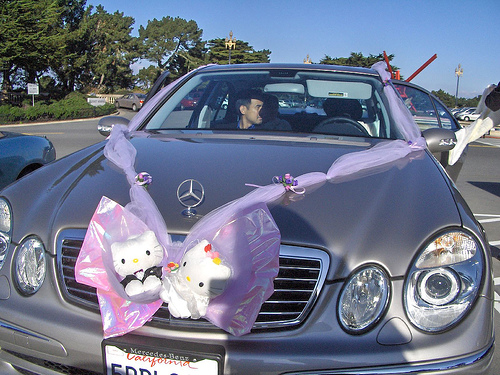 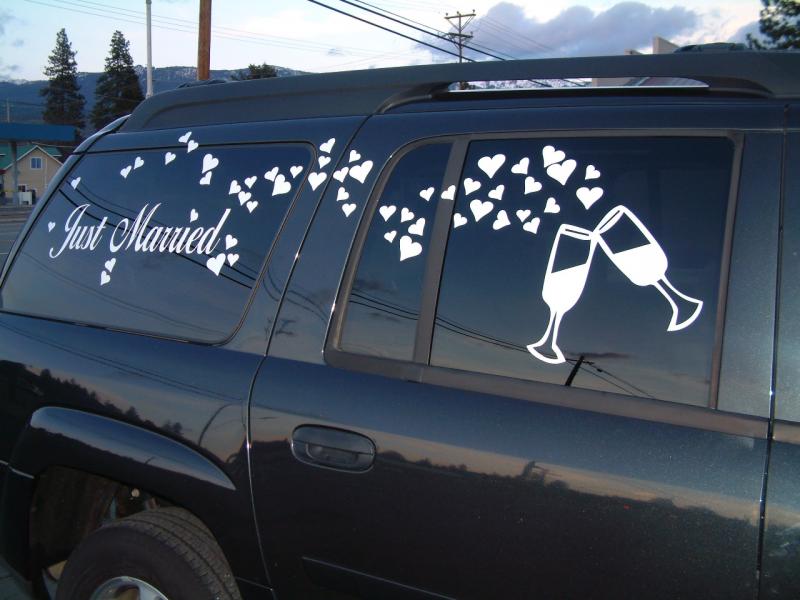 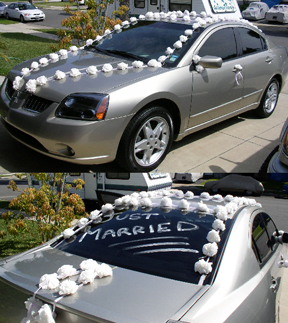 Do # 5:  Do tie old shoes and bottles and cans onto the back bumper if you want.  It’s a cute tradition that harms no one and nothing.  Just don’t go dumpster diving to find someone’s used soda bottle at the last minute because you were too lazy to plan ahead.

Do # 6:  They even make specialty license plates that trumpet the good news  that the occupants in the car are “JUST MARRIED!”.

Do # 7:  Coordinators, it’s a good idea to stock window chalk, crepe paper streamers, balloons and vynyl window clings in your Emergency Kit just in case the groomsmen did not plan ahead and are tempted to scavenge whatever they can find.

So, guys, with this plethora of good ideas, there is no excuse for doing a sloppy, embarrassing, humiliating travesty of a decorating job on your friends or family’s getaway vehicle.

Next post: Ursula, You Make-a Me Want To Curse You-la